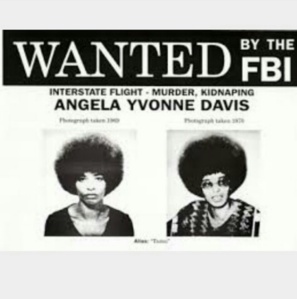 – Angela Davis was born on January 26, 1944, in Birmingham, #Alabama. Both of her parents were college graduates and worked as school teachers. Her brother, named Ben Davis, played for the Cleveland Browns and Detroit Lions in the 60s and 70s. Young Angela chose to attend a small private school known as the ‘Little Red School House’ in Greenwich Village in #NewYorkCity. There she got involved in studies of socialism and communism and befriended the children of the leaders of the Communist Party, including her lifelong friend, Bettina Aptheker.Angela Davis was awarded a full scholarship to Brandais University in Massachusette, where she met German-American philosopher #HerbertMarcuse, later becoming his student at UCSD. Together with Herbert Marcuse she participated in a political rally during the Cuban Missile Crisis. At that time she studied #KarlMarx, Albert Camus, and Jean-Paul Sartre, and spent summer in Paris and Helsinki, where she participated in the World Festival of Youth and Students. There Davis met with the Cuban students and became a supporter of #FidelCastro and Cuba. Then she continued her studies at the University of Frankfurt, Germany for 2 years, from where she graduated in 1965.Davis returned to East Germany for her Ph. D. in philosophy from Humboldt University in East Berlin. Back in California she worked as a lecturer at #UCLA during the 60s. At that time Davis was a radical feminist and a member of the Communist Party USA and was also associated with the Black Panther Party. She was fired from University of California in 1969, in a controversial decision by the Board, pushed by then Governor Ronald Reagan. She was later rehired to her job.In 1970, Angela Davis appeared on the FBI’s Most Wanted List. She was able to evade the police for 2 months before being arrested. She spent 18 months in the Women’s Detention Center in New York awaiting the trial. In 1972 #JohnLennon and #YokoOno supported her with their song “Angela” and Rolling Stones recorded their song “Sweet Black Angel” advocating her release. She was tried and acquitted of all charges.